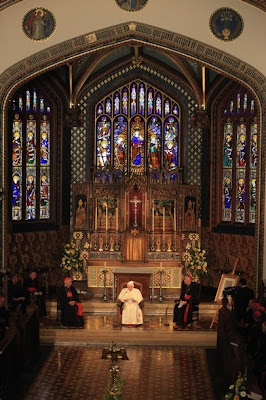 This has been a day of great joy for the Catholic community in these islands. Blessed John Henry Newman, as we may now call him, has been raised to the altars as an example of heroic faithfulness to the Gospel and an intercessor for the Church in this land that he loved and served so well. Here in this very chapel in 1852, he gave voice to the new confidence and vitality of the Catholic community in England and Wales after the restoration of the hierarchy, and his words could be applied equally to Scotland a quarter of a century later. His beatification today is a reminder of the Holy Spirit’s continuing action in calling forth gifts of holiness from among the people of Great Britain, so that from east to west and from north to south, a perfect offering of praise and thanksgiving may be made to the glory of God’s name.

I thank Cardinal O’Brien and Archbishop Nichols for their words, and in so doing, I am reminded how recently I was able to welcome all of you to Rome for the Ad Limina visits of your respective Episcopal Conferences. We spoke then about some of the challenges you face as you lead your people in faith, particularly regarding the urgent need to proclaim the Gospel afresh in a highly secularized environment. In the course of my visit it has become clear to me how deep a thirst there is among the British people for the Good News of Jesus Christ. You have been chosen by God to offer them the living water of the Gospel, encouraging them to place their hopes, not in the vain enticements of this world, but in the firm assurances of the next. As you proclaim the coming of the Kingdom, with its promise of hope for the poor and the needy, the sick and the elderly, the unborn and the neglected, be sure to present in its fulness the life-giving message of the Gospel, including those elements which call into question the widespread assumptions of today’s culture. As you know, a Pontifical Council has recently been established for the New Evangelization of countries of long-standing Christian tradition, and I would encourage you to avail yourselves of its services in addressing the task before you. Moreover, many of the new ecclesial movements have a particular charism for evangelization, and I know that you will continue to explore appropriate and effective ways of involving them in the mission of the Church.

Since your visit to Rome, political changes in the United Kingdom have focused attention on the consequences of the financial crisis, which has caused so much hardship to countless individuals and families. The spectre of unemployment is casting its shadow over many people’s lives, and the long-term cost of the ill-advised investment practices of recent times is becoming all too evident. In these circumstances, there will be additional calls on the characteristic generosity of British Catholics, and I know that you will take a lead in calling for solidarity with those in need. The prophetic voice of Christians has an important role in highlighting the needs of the poor and disadvantaged, who can so easily be overlooked in the allocation of limited resources. In their teaching document Choosing the Common Good, the Bishops of England and Wales underlined the importance of the practice of virtue in public life. Today’s circumstances provide a good opportunity to reinforce that message, and indeed to encourage people to aspire to higher moral values in every area of their lives, against a background of growing cynicism regarding even the possibility of virtuous living.

Another matter which has received much attention in recent months, and which seriously undermines the moral credibility of Church leaders, is the shameful abuse of children and young people by priests and religious. I have spoken on many occasions of the deep wounds that such behaviour causes, in the victims first and foremost, but also in the relationships of trust that should exist between priests and people, between priests and their bishops, and between the Church authorities and the public. I know that you have taken serious steps to remedy this situation, to ensure that children are effectively protected from harm and to deal properly and transparently with allegations as they arise. You have publicly acknowledged your deep regret over what has happened, and the often inadequate ways it was addressed in the past. Your growing awareness of the extent of child abuse in society, its devastating effects, and the need to provide proper victim support should serve as an incentive to share the lessons you have learned with the wider community. Indeed, what better way could there be of making reparation for these sins than by reaching out, in a humble spirit of compassion, towards children who continue to suffer abuse elsewhere? Our duty of care towards the young demands nothing less. 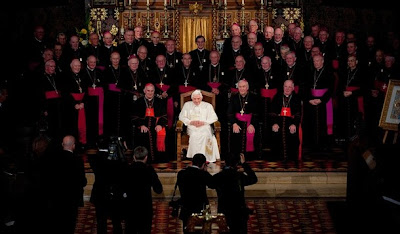 As we reflect on the human frailty that these tragic events so starkly reveal, we are reminded that, if we are to be effective Christian leaders, we must live lives of the utmost integrity, humility and holiness. As Blessed John Henry Newman once wrote, “O that God would grant the clergy to feel their weakness as sinful men, and the people to sympathize with them and love them and pray for their increase in all good gifts of grace” (Sermon, 22 March 1829). I pray that among the graces of this visit will be a renewed dedication on the part of Christian leaders to the prophetic vocation they have received, and a new appreciation on the part of the people for the great gift of the ordained ministry. Prayer for vocations will then arise spontaneously, and we may be confident that the Lord will respond by sending labourers to bring in the plentiful harvest that he has prepared throughout the United Kingdom (cf. Mt 9:37-38). In this regard, I am glad that I will shortly have the opportunity to meet the seminarians of England, Scotland and Wales, and to assure them of my prayers as they prepare to play their part in bringing in that harvest.

Finally, I should like to speak to you about two specific matters that affect your episcopal ministry at this time. One is the imminent publication of the new translation of the Roman Missal. I want to take this opportunity to thank all of you for the contribution you have made, with such painstaking care, to the collegial exercise of reviewing and approving the texts. This has provided an immense service to Catholics throughout the English-speaking world. I encourage you now to seize the opportunity that the new translation offers for in-depth catechesis on the Eucharist and renewed devotion in the manner of its celebration. “The more lively the eucharistic faith of the people of God, the deeper is its sharing in ecclesial life in steadfast commitment to the mission entrusted by Christ to his disciples” (Sacramentum Caritatis, 6). The other matter I touched upon in February with the Bishops of England and Wales, when I asked you to be generous in implementing the Apostolic Constitution Anglicanorum Coetibus. This should be seen as a prophetic gesture that can contribute positively to the developing relations between Anglicans and Catholics. It helps us to set our sights on the ultimate goal of all ecumenical activity: the restoration of full ecclesial communion in the context of which the mutual exchange of gifts from our respective spiritual patrimonies serves as an enrichment to us all. Let us continue to pray and work unceasingly in order to hasten the joyful day when that goal can be accomplished.

With these sentiments, I thank you warmly for your hospitality over the past four days. Commending all of you and the people you serve to the intercession of Saint Andrew, Saint David and Saint George, I am pleased to impart my Apostolic Blessing to you and to all the clergy, religious and lay faithful of England, Scotland and Wales.