Great article on Christian symbology from New Liturgical Movement. And, the symbol is one of my favorites – the Pelican. 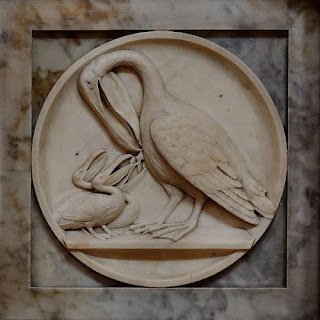 Is there a danger that trying to reestablish traditional Christian symbols in art would sow confusion rather that clarity? Lots of talks and articles about traditional Christian art I see discuss the symbolism of the iconographic content; for example, the meaning of the acacia bush (the immortality of the soul) or the peacock (again, immortality). This is useful if we have a printed (or perhaps for a few of you an original) Old Master in church or a prayer corner as it will enhance our prayer life when contemplating the image. But is this something that we ought to be aiming to reinstate the same symbolism in what we produce today? Should we seek to educate artists to include this symbolic language in their art?

If symbols are meant to communicate and clarify, they should be readily understood by those who see them. This might have been the case when they were introduced – very likely they reflected aspects of the culture at the time – and afterwards when the tradition was still living and so knowledge of this was handed on. But for most it isn’t true now. How many would recognize the characteristics of an acacia bush, never mind what it symbolizes? If you ask someone today who has not been educated in traditional Christian symbolism in art what the peacock means, my guess is that they are more likely to suggest pride, referring to the expression, ‘as proud as peacock’. So the use of the peacock would not clarify, in fact it would do worse than mystify, it might actually mislead. (The reason for the use of the peacock as a symbol of immortality, as I understand it, is the ancient belief that its flesh was incorruptible). So to reestablish this sign language would be a huge task. We would not only have to educate the artists, but also educate everyone for whom the art was intended to read the symbolism. If this is the case, why bother at all, it doesn’t seem to helping very much, and in the end it will always exclude those who are not part of the cognoscenti . This is exactly the opposite of what is desired: for the greater number, it would not draw them into contemplation of the Truth, but push them out.

I think that the answer is that some symbols are worth persevering with, and some should be abandoned. First, it is part of our nature to ‘read’ invisible truths through what is visible. This does not only apply to painting. The whole of Creation is made by God as an outward ‘sign’ that points to something beyond itself to Him, the Creator. Blessed John Henry Newman put it in his sermon Nature and Supernature as follows: “The visible world is the instrument, yet the veil, of the world invisible – the veil, yet still partially the symbol and index; so that all that exists or happens visibly, conceals and yet suggests, and above all subserves, a system of persons, facts, and events beyond itself.” It is important to both to make use of this faculty that exists in us for just this purpose; and to develop it, increasing our instincts for reading the book of nature and in turn, our faith.

However, coming back to the context of art again, some discernment should be used, I suggest. I would not be in favour of creating an arbitrarily self-consistent symbolism. The symbol must be rooted in truth. The symbolism in the iconographic tradition is very good at following this principle. This is best illustrated by considering the example of the halo. This is very well known as the symbol of sanctity in sacred art. There are very good reasons for this. The golden disc is a stylized representation of a glow of uncreated, divine light, shining out of the person. Even if this were not already a widely known symbol, it would be worth educating people about the meaning of it, because in doing so something more is revealed. When however, the representation of a halo develops into a disc floating above the head of the saint, as in Cosme Tura’s St Jerome, or even a hoop, as in Annibale Caracci’s Dead Christ Mourned, (both shown) then it seems to me that the symbol has become detached from its root. Neither could be seen as a representation of uncreated light. These latter two forms, therefore, should be discouraged.

Similarly, those symbols that are rooted in the gospels or in the actual lives of the saints should be encouraged and the effort should be made, I think, to preserve or, if necessary, reestablish them. The tongs and coal of the prophet Isaias relate to the biblical accounts of his life. The inclusion of these, will generate a healthy curiosity in those who don’t know it, and so might direct them to investigate scripture. The picture shown below, incidentally, is one that I did as a demonstration piece for our recent summer school at Thomas More College in New Hampshire.

In contrast consider the peacock and the pelican. The peacock, as already mentioned, does not, we now know, have incorruptible flesh. The pelican is a symbol of the Eucharist based upon the erroneous belief in former times that pelicans feed their young with their own flesh. The immediate reaction is that these should not be used (I am not aware of any biblical reference to these two creatures that would justify it). However, I am torn by the fact that both of these are beautiful and striking images, even if based in myth.

Also, it might be argued, and this is particularly true for the pelican, that to use it is not resurrecting an obscure medieval symbol. It is an ancient symbol certainly – and St Thomas Aquinas’s hymn to the Eucharist, Adore te devote called Christ the ‘pelican of mercy’. But it lasted well beyond that. It was very widely understood even 50 years ago. Awareness of it is still common nowadays amongst those who are interested in liturgy and sacred art. Perhaps an argument could be made that even when the reason for the use of symbol is based in myth, if that is known and understood, and when that symbol recognition is still widespread enough to be considered part of the tradition, it should be retained. We should also remember that modern science is not infallible, and we moderns could be those who are mistaken about the pelican! My Googling research (admittedly even less reliable than modern science) revealed that the coat of arms of Cardinal George Pell has the image of the pelican. If this is so, I imagine he would have something to say about the issue also!

I would love to know the thoughts of readers on these points.