I can remember while growing-up my maternal grandmother starting in the summer preparing her Poinsettia to bloom at Christmas using light deprivation. Into the dark closet for twelve hours and out for twelve. Her Poinsettia plants were her pride an joy. Could you imagine what Mass would be like without all those beautiful red and white Poinsettias decorating the altars and sanctuaries? There a number of plants and flowers that are associated with this feast day. The three most popular are Poinsettias, Mistletoe and Holly. Let’s take a quick look… 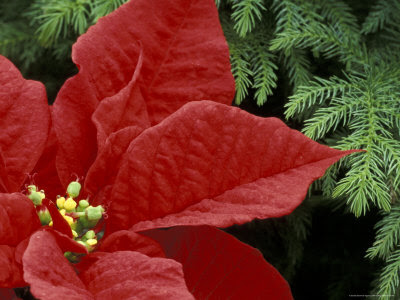 Over the centuries, a few Christmas traditions have developed concerning plants. The most obvious, of course, is the Poinsettia.  (Actually, here in the United States, it is a tradition that is less than 100 years old.)  The plant finds its origin in Mexico where it grows as a shrub. It blooms at Christmastime and, thus, has earned the name “flower of the Holy Night.” The first Ambassador to Mexico, Dr. Joel Roberts Poinsett (1779-1851), brought them to the United States and had them grown in his greenhouse in South Carolina. (Only since 1920 have they become potted plants.)  Eventually, they were named after him and have become associated with Christmas just like Lilies are associated with Easter. Mistletoe can be found hanging above the doorway in many houses during Christmas. While a number of authors have tried to suggest that it is a Christian symbol, it is not. In fact, it was forbidden in most Christian Churches (Catholic and Protestant alike) even as late as 1960. Once one pushes aside the superstition, the main objection to Mistletoe is its use in treaties and modern traditions. In the past, Mistletoe “groves” were used to settle treaties by sending in the daughter and the son of a warring clan, or nation, at which time they consummated the treaty with far more than a kiss. Over time, it became the practice that anyone who found themselves in a mistletoe grove would be obliged to consummate their meeting (especially in Scandinavia). In modern times, a young man may still steal a kiss from a woman when they are found under mistletoe. (Most have forgotten that when a kiss is stolen a berry is removed. The kissing privilege was only valid when the Mistletoe still had berries.)

As we might surmise, the Church did not have a favorable opinion of mistletoe… not just because of the pagan superstitions, but also because of the association with forcible relations and “love” without commitment. Mistletoe is also an invasive and parasitic plant, something that true love and the marital gift is not. The Church did offer an alternative though… holly. Christianity saw in the natural formation of the plant a symbolic link with agape, or sacrificial love. The evergreen leaves symbolized the eternal and divine nature of Jesus. At the same time, the holly being a created thing symbolized His humanity. The five sharp points on the tips of the leaf were connected to the five wounds of Christ. The red berries symbolized the drops of blood shed out of for love us. The Church preferred, and continues to prefer, holly over mistletoe in the ecclesial Church and the domestic Church (our houses).

There are a number of legends associated with various Christmastime plants but the aforementioned are the three most prominent. As we draw closer to the Christmas season, take some time to decorate your house with the signs of the times. Kids will remember what they see and one day be old enough to receive the proper interpretation. For the rest of the world, let them decorate. They, too, will one day meet the reason for the season. Remember, cultural practices rise up out of our worship and beliefs. Take a look around your house… does it reflect a Catholic worldview, or are you merely decorating to win the local neighborhood award?

Here is some Christmas cheer while you are decorating:

One Response to Signs, Symbols & Traditions of the Season: Plants