The Historical Date of Christmas

So, it is a private joy of mine to observe some of the arguements among the teens within our youth group. A few weeks ago, the subject was the date of the Solemnity of the (Thanks for the correction Fr. Schierer!) Nativity of Our Lord (Christmas for those who are unaware of the correct name) and how it was chosen. It seems that the theological urban legend of Saturnalia is right now at the forefront. Unfortunately, that would not be correct albeit a very popular theory.

Dr. Taylor Marshall at the Cantebury Tales blog wrote on the subject so beautifully and thoroughly that I thought he should say it. Please, oh please, will all the catechists out there teach your students correctly? December 25 is the historical date for the birth of our Lord.

Pope Benedict XVI: December 25 as the Historical Date of the Christ’s Birth 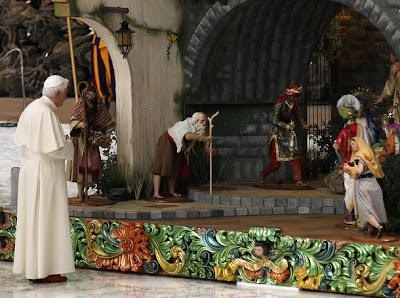 In two previous posts, we examined how the Bible indicates that Christ was born in late December and how Mary and the Apostolic tradition  prior to Constantine confirm December 25 as the historical date of Christ’s birth at Bethlehem. Today we turn to our present Holy Father, Pope Benedict XVI.
Please read:

Part 1: Was Christ Truly Born on Dec 25 – A Biblical Argument for Christ’s Birth in Late December

Part 2: December 25 is the Historical Birthday of Christ: Mary and Tradition
In 2000, Joseph Cardinal Ratzinger wrote in his book The Spirit of the Liturgy that a Jewish tradition holds that Abraham almost sacrificed Isaac on Mount Moriah on March 25. Mount Moriah is Jerusalem (see 2 Chron 34:1), and March 25 is the date on which Christ was crucified on the solar calendar (Easter like the Mosaic Passover is calculated by a lunar phenomenon). I think that you can see that there is a geographical and temporal parallel here. We see that the Father willingly offers His only-begotten Son.
Cardinal Ratzinger also noted that March 25 was thought to be the first day of creation. Hence, March 25 has a cosmic significance. His Eminence also describes how the zodiac and Aries relates to this cosmic significance in the Spring, but that is a bit too much for our purposes. The important thing is that March 25 was the traditional date for the creation of the world, for the sacrifice of Abraham, and for the sacrifice of God the Son.
On pages 107-108, Cardinal Ratzinger makes the observation that the day of Christ’s death was also reckoned as the day he was conceived by the Holy Ghost in the womb of the Blessed Virgin Mary. March 25, then was the annunciation of Gabriel. Add nine months to that and you arrive at December 25 as His birthday.
Ratzinger then dismisses what he calls “these old theories” that teach that December 25 was chosen to cover over pagan holidays. Rather, the Holy Father recognizes December 25 as the true birthday of Christ the Lord. He expands that this alignment of meanings has liturgical significance.
While we’re on the topic, Pope Saint Leo the Great spoke of the cosmic meaning of Christ’s birth in the depth of winter:

But this Nativity which is to be adored in heaven and on earth is suggested to us by no day more than this when, with the early light still shedding its rays on nature, there is borne in upon our senses the brightness of this wondrous mystery. (St Leo Magnus, Sermo 26)

Also, Pope Benedict XIV argued in 1761 that the church fathers would have known the correct date of birth from Roman census records.
Merry Christmas!
Part 1: Was Christ Truly Born on Dec 25 – A Biblical Argument for Christ’s Birth in Late December
Part 2: December 25 is the Historical Birthday of Christ: Mary and Tradition

← Applause for Msgr. Pope: A Brief Rant on Tattoos
The Beautiful Body →

2 Responses to The Historical Date of Christmas