You are the Potter, We are the Clay 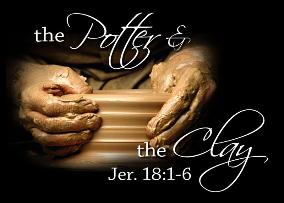 his Lent, my team at work has been using Fr. Thomas D. Williams, The Sacred Heart for Lent: Daily Meditations for our morning offering. Today’s meditation struck a chord with me because it touches on the redemption of our desires.

When an argument over which of them was the most important broke out among the disciples, Jesus told them that whoever wanted to be first must be last-and the servant of all. Interestingly, Jesus doesn’t seem to mind that the apostles were ambitious. He doesn’t reproach them for desiring greatness or for wanting to be all they could be. Instead, he invites them to set their sights higher still, to where true greatness lies. (p.30-31)

Notice that our Lord does not scold the disciples nor discourage their desires. Why? Because there is nothing wrong with desiring greatness per se. The challenge is in how we define greatness. The Lord did not want to extinguish that desire but to re-direct it towards a higher greater goal. He does not want us to settle for less but wants us to go for gold. In fact, one could make the argument that He wanted to fan into flame their desires to cause it to grow. Jesus knows that desires are part and parcel of the human person.

He also knows that we need to re-shaped and form like a potter working the clay:

God loves us as we are and yet, loves us enough not to leave us that way.

It seems that Buddhism, in all of its forms, is spreading like wildfire throughout Hollywood and our college campuses. Admittedly, Buddhists are among the most gentle and peaceable individuals I have met. My paternal grandmother, of fond memory, and her entire family are Buddhist converts to Catholicism. Let’s admit the obvious that the Buddhist witness is very attractive. Consequently, Buddhism is quickly becoming the choice path to self-enlightenment and inner peace for the masses. But at what price?

The Four noble Truths of Buddhism attempt to address the mystery of human suffering – and there is much suffering in the world. The First Truth admits that suffering exists. The Second Truth seeks to explain the nature of suffering by stating that desire and ignorance are at the root. The Third Truth suggests that suffering may be destroyed through achieving Nirvana – a transcendent state free from suffering through spiritual enlightenment and rebirth. The Fourth Truth lays out the plan to end the suffering through the Noble Eightfold Path. The steps include:

The first three relate to the theme of good moral conduct. The next three are acquired through meditation and mental development while steps seven and eight themes of wisdom and insight.

What we need to understand is that desire is very much the enemy to the Buddhist and that it is our self-efforts that will free us from the enemy. The Buddhist is called to a life of self-discipline and meditation sets in order to destroy all the craving desires of the heart. The challenge is that the word craving and desire are, well, pretty much synonymous. The difference is the degree of intensity.

But here is where Catholicism and Buddhism clash. Catholicism teaches that desire is true expression of the human heart. It expresses a real human need to be fulfilled. That being said, the Church also admits that our desires need to be redeemed. Due to original sin, they are many times twisted and aim at the base instead of the good, true and beautiful. In other words, we prefer the Pinto instead of the Ferrari. But that does not mean they are evil – just confused. Besides, to amputate a part of who we are is to make us less than human. Holiness is a work of grace and integration. As St. Augustine said, grace builds on nature.

Additionally, Buddhism relies on self-effort to overcome and destroy these desires. We recognize that our efforts will never be enough. We understand that without the aid of grace we will never be able to see those hidden sins. We admit that we are not strong enough to overcome ourselves. At the end of the day, humility causes us to admit that we need a redeemer.

So what is our Lord’s plan of redemption for our desires? Turning away from the world and turning to Jesus through humility and prayer. This will result in a transformation at every level. Much can be said about humility and prayer but I am confident that you could say it better or you have a great book that you are reading for Lent. On transformation, St. Paul said it best:

Do not be conformed to this world but be transformed by the renewal of your mind, that you may prove what is the will of God, what is good and acceptable and perfect. (Romans 12:2)

Desire greatness. Desire excellence. Desire that the Lord transforms you and your desires “from glory to glory.” (2 Corinthians 3:18)

← Lenten Foods: The Pretzel
Homily: At the Well →